I time-traveled recently. In a couple different ways.

In October my wife, four kids, and myself squeezed into our minivan and pointed it toward Pittsburg. No, not that one. Pittsburg, Kansas. A dear friend of ours was turning fifty-years-old and a surprise party that had been marinating for many months was finally underway.

It is a very weighty decision to load one’s children in and out of a vehicle. By choosing to hoist, buckle, snap, pull, and occasionally threaten your kids, you are proclaiming, through action, that the subsequent trip is worth it. If we ever meet up with you, and bring our kids along, you should feel very honored. Loading kids into a vehicle is not a breezy choice. If you have children you’re familiar with the mental flowchart that decides this. I’ve made one below for those with offspring in their future. 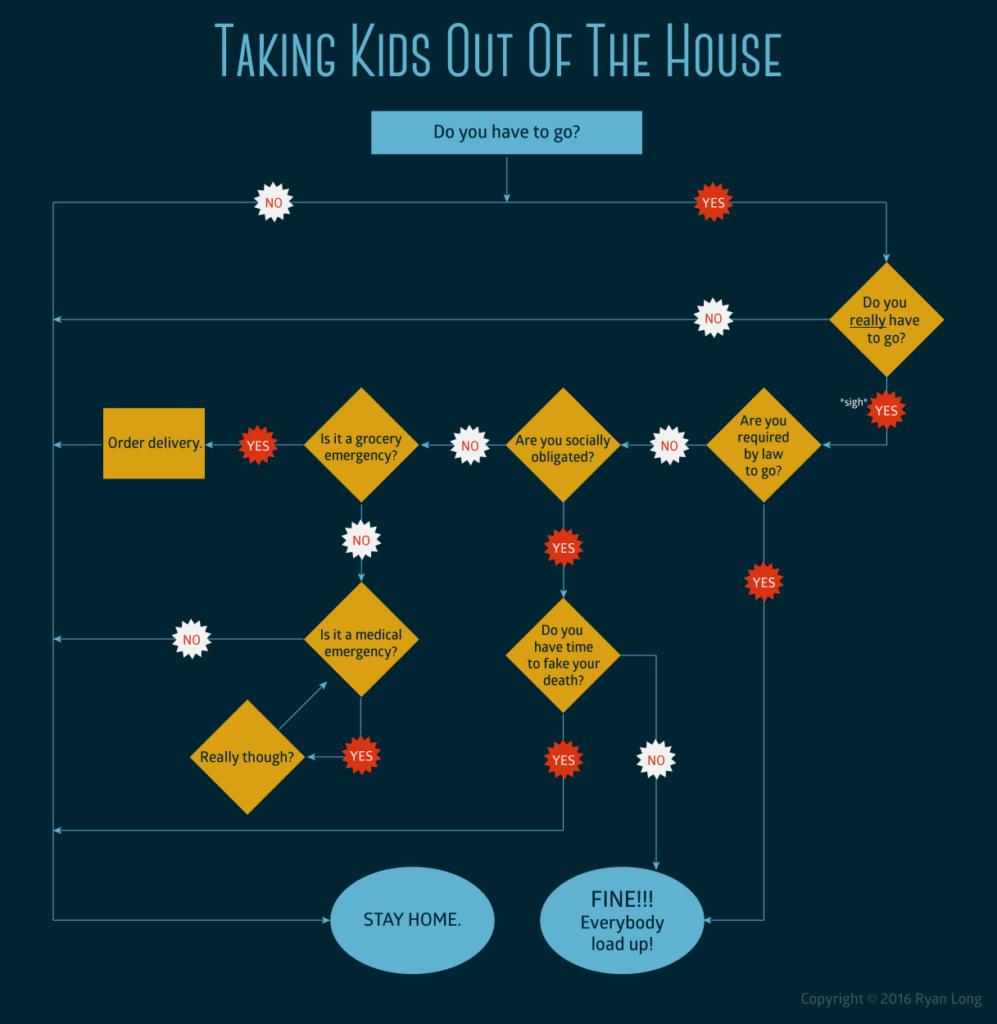 We’re all out of toilet paper! Should I load all four kids in the van and go to the store? Nope. We have napkins.

It takes a lot to get out of the house with four children. It takes even more to truck them across God’s green Earth.

And our friend David is worth it. And then some.

His party was a Saturday evening. We left that morning and had most of the day to make the five hour trip. “Five hour trip” for a single adult, driving with snacks and an empty bladder. For a family of six, with children ranging from eighteen months to seven-years-old, the formula for calculating drive time is to substitute days for hours.

I may be exaggerating a little.

It actually takes a lot longer than that.

The trip started fine. We always make sure our kids pee before we buckle them in. This is a common sense, innate instinct to all parents since the dawn of time.

Father: Go potty before we get in the chariot.
Son: But it’s 1300 B.C., we can literally just pee wherever we want.
Father: I SAID GO POTTY!

It is not the fear of being miles from a toilet that compels us—if peed pants would in any way make the trip shorter I’d be all for it. The fear is that our children, with frequent stops, will create a Groundhog Day-esque time vortex, sending the trip into the abyss.

As the interstate gave way to a monotonous miles of Midwest scenery my kids decided to play a game. It was like the Letter Game, the one where you find each letter of the alphabet, in order, on road signs. But instead it was find each exit, in order, and take turns screaming, “I CAN’T HOLD IT ANYMORE!”

We are no parenting slouches. At the first stop we hauled everyone into the gas station restrooms and had them wring out their bladders. We wanted to be sure every single tiny human was on empty. Satisfied, we took to the road and ramped back up to cruising speed. Lo and behold, the next gas station we pass we hear some fool child from the back seat yell, “I have to use the bathroom.”

I have a traveling motto. Dehydration is your friend. The less you drink the further you’ll get. When we stopped for lunch I proposed the idea of getting our kids food, but not drinks. I told Charity that they could swallow their saliva. She apparently couldn’t see the reasoning behind it and vetoed the idea because she likes needlessly getting four children in and out of a vehicle for hours on end. Maybe it’s a secret workout routine for her. Maybe she’d missed a few months and was trying to catch up that day.

And I think she did. Each exit would reveal a new full bladder and a new opportunity for me to practice not swearing in front of my children. Especially when they started to take their shoes and socks off as we pulled into the parking lot. This happened more than once, which considerably increased the opportunity mentioned above. My tongue is now home to permanent teeth imprints.

Halfway through the trip I began to notice that life was slowing down. The mile markers began reversing. Time itself started to move backwards. But not in a cool, alter-the-past-to-change-the-future kind of way, but in a sad, is-it-all-worth-it kind of way. I’m only 65% sure that I’m not still in our minivan and the last couple months have all been a dream. I wouldn’t be surprised to wake up in a gas station parking lot and find out I’m only three miles outside of Omaha.

Another instance of time-travel that I ran into on this trip, dream or not, involved the aforementioned lunch. Due to the aforementioned pit stops—felt more like tar pit stops—we were behind schedule. Really the only item on the aforementioned schedule was to surprise our kids with a meal at the T-Rex Cafe in Kansas City. We’d eaten there once when we only had two kids, and an embarrassingly low appreciation for only having two kids. We knew our four kids would love it. The only problem was that they didn’t know they’d love it, and were getting hungry as crap.

Around 12:30 p.m. they started shouting out the names of every fast food place that overlooked every off ramp we approached. Begging to stop, crying, wondering if their parents loved them. We kept telling them that we were eating someplace special if they could just LEAVE US ALONE ABOUT IT FOR THE LOVE OF ALL THAT IS HOLY!!!

The van finally rolled into the parking lot around 1:30 p.m. By then we were all hungry and not really seeing the value of family. Just trying to find a parking space about sent Charity and I to marriage counseling. We all fell out of the van and swiveled our heads around looking for food, like zombies. “This way,” I yelled and took off. Hoping my family was following me, but not really that concerned about it.

T-Rex isn’t a subtle restaurant. Embedded in the side of the building is a giant skeleton of a long-neck dinosaur, a Brachiosaur maybe. My daughter Nola (7) could probably tell you for sure. We rounded the corner, I waved my hands in the air like I just completed a magic trick, and our famished children suddenly forgot that they were hungry.

The inside was even more awesome. Animatronic dinosaurs welcome you at every turn. Forest, arctic, and underwater habitats divide the space. The hostess whisked us away to the promise of a magical setting for us to fill our bellies, as well as our imaginations. Unfortunately we didn’t land in such a place. We ended up in basically the armpit of the T-Rex Cafe. The underwater section. A habitat that fourteen Land Before Time movies didn’t think was interesting enough to explore. While other sections got to chat it up with Triceratopses and Allosauruses, we got to awkwardly stare at the backside of a giant shelled squid. 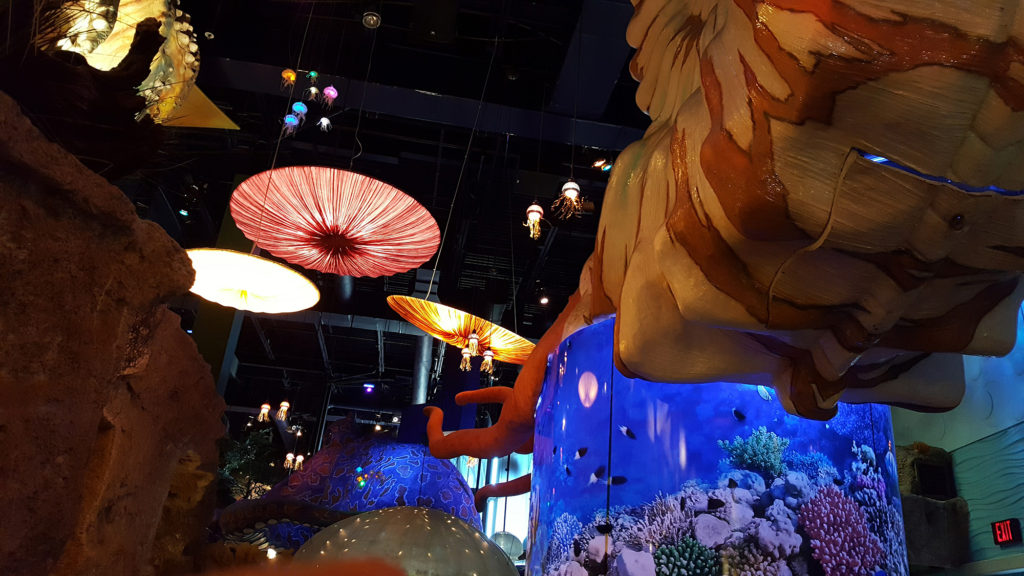 It was well after 2 p.m. before we saw a hint of food, and that hint went to the table next to us. Our slow food and lame setting quickly melted away the restaurant’s novelty as hunger returned. We began taking our kids to the potty, one-by-one, to pass the time. Might as well be preemptive. One of these times I returned and warm food covered our table top. I threw down whatever kid I was holding and began stuffing my face. That’s what you’re supposed to do right? Just like the overhead airplane oxygen. Help yourself first, worry about your children later. Same idea.

Once we were able to satiate our angry bellies we had a good time. We explored the place, and it felt worth it. Worth it in the making-a-memory sense. You don’t go to T-Rex for the high-prices, or lethargic service, you go there for the atmosphere. And also to to learn new ways to tell your kids no as you inevitably stroll through the gift shop. 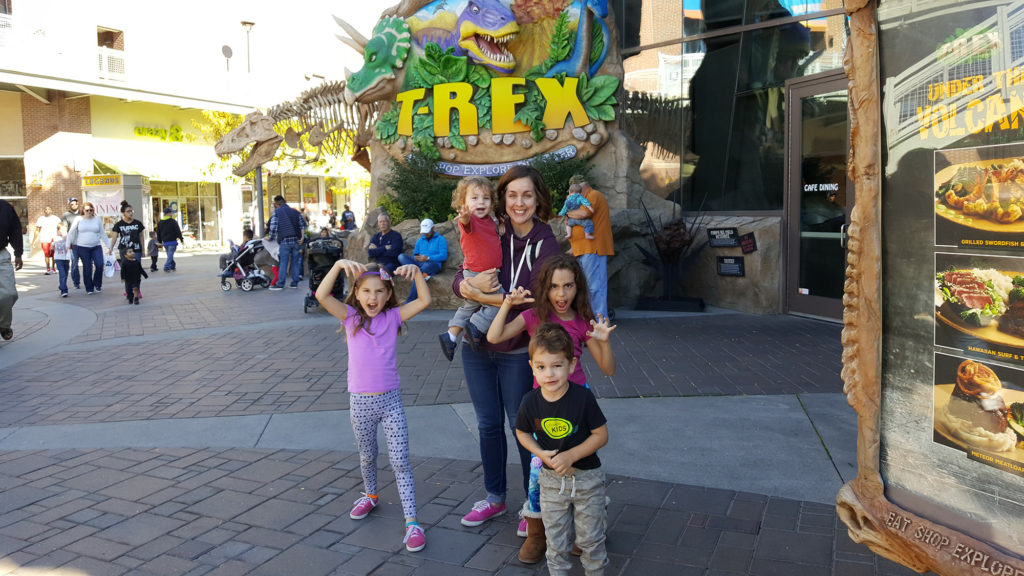 I think we made a memory that day. It almost killed us but we did it. And that was worth the wait and the money.

Unless of course it is a memory made within a dream, and I’m currently slumped over a steering wheel somewhere, drooling onto the column while my wife is putting socks and shoes on our tiny-bladdered children.