Halloween is one of our favorite times of the year. It may edge out over Christmas a little bit. Shhhhh, don’t tell our super-conservative upbringing that. The beauty of this fall celebration lies in its extraversion. It’s the one time, out of the entire year, where we collectively set down our political stances, ideals, and opinions—unless of course your opinion is against Halloween—and we all unite behind the glorious banner of juvenile tooth decay. In one night you can see and interact with almost all of your neighbors, no awkward icebreakers required. It’s your immediate community, on a cosplay speed date. And that’s pretty cool. Heck, even the White House hands out candy.

The day after Halloween though, is one of our least favorite times of the year. Those following along may remember the Halloween Tears of 2015.

Candy. This is the real reason kids participate in this blessed event. Dressing up in your favorite costume to go high-five the neighbors would not elicit the same joy that receiving extruded pieces of flavored sugar would.

Parents: “Hey kids, you want to canvas the neighborhood, filling a bucket full of every candy bar imaginable?”
Kids: “YES!”
Parents: “Do you want to wear your favorite costume?”
Kids: “Fine whatever…”

This year, again we got stung with the harsh realities of supply and demand. We had so much supply, and so much demand, and so many children. To avoid the pitfalls of last year we strove to regulate the sugar intake and subsequent crashes of our four dependents. Our two older girls Nola(7) and Violet(5) did much better this year. When we got home from making our rounds they slammed a couple fistfuls of candy then headed to bed. The next day school pulled them away from their overflowing sacks so that seemed to help.

Roman(almost 3 years old) on the other hand came home Halloween evening, tested the weight of his Trick-or-Treat bag in his straining arms, and said, “Yeah, that feels like one serving.” He then put on his tunnel vision glasses and went to town on that bad boy. The problem with regulating Roman lies not necessarily with him, but with his siblings. Charity and I were too busy trying to get kids ready for bed, and field questions about how much candy they can have tomorrow, to properly walk Roman through the regulation protocols. All we could do was yell, “Roman, no more candy ok?” He would nod with all sincerity. Of course Dad, great idea. Then, not missing a beat, he’d turn back to his bag and continue processing the processed confections through his mouth hole.

In his defense, there was a giant sack of candy distracting him from understanding what he was agreeing to. And also my request made no sense. All he wanted was one serving? Why would his loving father deny him that?

Finally I had a free hand and was able to pry the sack from him. His reaction was that of someone losing their land to a corrupt government. Much crying. Falling to the floor. Hard-earned assets disappearing into the hands of the Man.

The next day proved to be more of the same as three-and-a-half metric tons of candy rested on the kitchen island. I got home from work to a chorus of sugar-related inquiries from the girls. Roman pressed on with his one goal of finishing the rest of the previous night’s “serving”. I kept finding him, candy falling out of his pockets and sleeves like an amateur eighth grade magician practicing for a talent show.

I seized his candy. He burst into tears. Then I grabbed some rope and a carabiner and, did not restrain him in a Child Protective Services approved way, but instead hoisted the candy into the stratosphere. 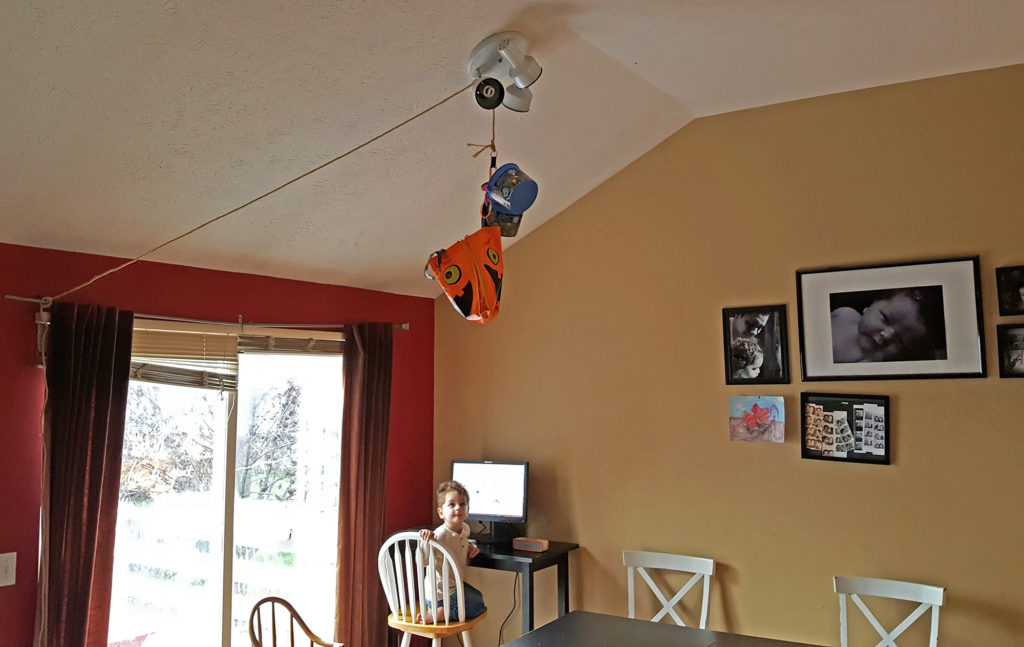 Much like how you would keep food away from bears when camping. Because let’s be honest, when it comes to regulating candy the difference between dealing with children and wild animals is minimal.

Could I have put the candy in one of our high cupboards? I did actually. I put most of it up high. The problem though is that 3/4ths of our children, through chairs, stools, and complicated systems of pulleys, can now ascend to counter height. From which they can gain access to the full contents of our kitchen. Good hiding places are becoming scarce. And besides they have a nose for candy. It’d only be a matter of time before they sniffed out a small patch of overturned dirt in the backyard, a soiled shovel lying next to it because their incessant nagging had mentally worn down their dad enough for him to forget to cover his tracks.

No no. I deemed the best course of action would be to put a portion of the candy on display, as a distraction from the bulk. To dangle it in front of them like a proverbial carrot, motivating them to eat their non-proverbial dinner vegetables.

The kids responded well to the arrangement. It was nice having heavenly candy watch over them, bestowing its warm light on their souls. It didn’t quell the deluge of candy-questions though, but it did keep Roman in check and that was a win. It only lasted a short while as I began to worry about the weight of the buckets and sacks ripping out our light fixtures. I didn’t want the cost of ceiling and structural repair to taint the joy of Halloween for years to come.

I think I’ll pursue this idea next year. I’ll have more time to drill some good-sized pulleys into the ceiling joists and rig up an old-timey, drawbridge style, hand crank for raising and lowering my children’s Trick-or-Treating fortune. Lord knows their Halloween loot is only going to keep growing.

It’s either that or we all agree to hand out year-long vouchers instead of candy. The kids could then come home with stacks of paper and the parents would issue them as they saw fit.

Parents: “Even though it’s April, if you finish cleaning your room you can redeem three vouchers at the White House this evening. Deal?”
Kids: “Yes!”
Parents: “Do you want to wear your favorite costume?”
Kids: “Fine whatever…”

That said, I need to get a plan in place soon. I’m not sure how long I have before Roman’s magician skills get perfected and the whole of his Halloween candy falls prey to sleight of hand. Then I’ll be left trying to figure out how to use my own sleight of hand to make a sugar-crashing little boy disappear. And I can’t guarantee that his reappearance would take priority.