Our kids are getting older and for some reason we keep adding to our total number of dependents. We had three treat-seeking participants this year and one in the wings. Needless to say that we came through Halloween quite scathed with candy. This year our two oldest girls moved like trick-or-treating pros and Roman(2) was getting the hang of it. The hard part for him, or should I say me, was that his legs are about a third as long as his sisters’. So in an effort to keep up I had to carry him, his candy, and the toy gun that he felt was no longer necessary to complete his ensemble. We went with our neighbors and their kids. He and I remained firmly at the caboose-end of that train.

But we got through it.

We all returned home that night with our spoils, I put Roman down, and then turned to instantly find Nola(6) and Violet(4), laying on the floor, buried under a pile of empty candy wrappers. Chocolate smeared across their face like they had been chased through Mordor. I’m not even sure how that was possible. We’d only been inside the house for 12 seconds. And for crying-out-loud at least clear the entryway so I don’t have to step over you.

With the days of, “Can you open this for me Dad,” behind us, they tore into their bags like…

I put a halt to the feeding frenzy and said that keeping them from slipping into a coma would be a win for the night.

The tricky part about trick-or-treating is tricking your kids into regulating the treats. This would be our next challenge.

The next two days were met with a litany of questions concerning the candy. Our girls wanted to know when they could have some, how many pieces, do they have to finish their dinner first, can they have candy while they are eating other candy, can they use candy to brush their teeth, can they distill their entire candy bag into a liquid that they can consume intravenously…

Fortunately my wife Charity had a great idea to hopefully bring some order to this. On the third day, post-Halloween, she labeled jars with their names and told them to pick out ten pieces of candy to put in them. She said that they can eat the candy whenever they want during the day but that is all they can have. Brilliant! They get to have some control over when and how much candy to eat all while teaching them how to ration and limiting the overall intake of the day. Most importantly they’d leave us alone about it.

And the parenting award goes to…

So we put the policy in place for Nola and Violet—Rome had eaten a fair share already so he’d been cut off. The girls carefully filled each of their jars with ten of their most prized fun-size pieces, like trophies. They were palate artists. Selecting the perfect playlist of processed confections to take their tastebuds on a magical journey. They thought of everything.

Then three minutes later their jars were completely empty and our trash can was twenty candy wrappers fuller.

At that point Charity decided to leave me with three time-bombs while she got to go somewhere else, away from all of us.

About 45 minutes later the consequences of our regulatory misstep came bearing down on me. The kids were playing downstairs and had spent their burst of sugar-fueled energy filling the TV room with every pillow and couch cushion that we owned. 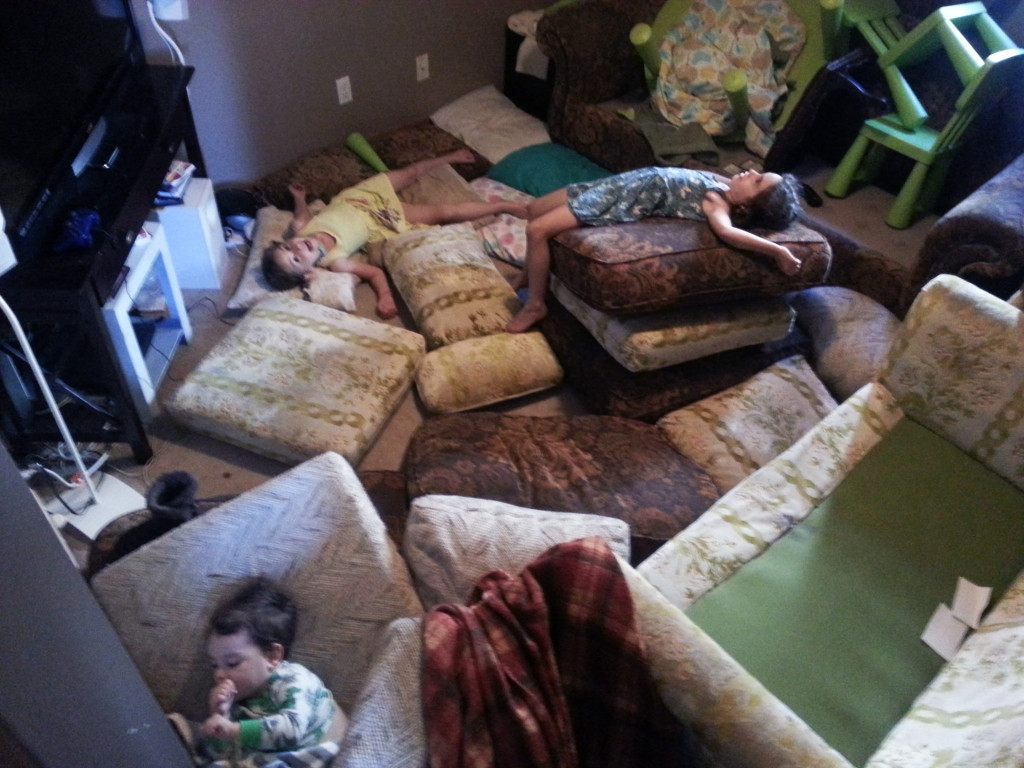 With their grandma coming to watch them in an hour, I told them to put everything back by the time she arrived.

And so it began.

Nola, Violet, and Roman all proceeded to simultaneously meltdown, like three cute little nuclear reactors. That’s actually a great comparison because much like my kids in that moment, nuclear reactors don’t jog down the stairs in obedience and, from my movie knowledge, they have loud sirens that match how vocal my kids were being about my request.

The next hour found all my children crying in three-part harmony. The pitches of each part were all a half step from each other so it sounded a lot like being poked in the ear with a jackhammer. Their fragile emotional state was not helped by the fact that they kept accidentally injuring themselves. Nola dropped a kid’s table on her toe, Violet and Roman high-fived with their heads, Violet knocked a chair over and it punched into Nola’s leg, Nola—while overacting her leg pain—later slipped on the linoleum and hurt her knee. At one point I was holding all three and rolling my eyes while I asked if they were alright. All while dreaming of what single people were doing that morning.

It should have taken them no more than ten minutes to clean up that room. It was all just big pillows and cushions. Instead they wisely spent that time battering themselves and lying around melodramatically weeping for an almost an hour.

I sneakily shot some footage of this wonderful moment from my pant’s pocket.

Standing in the midst of their sugar crash I came to the realization that the idea of letting our kids eat basically three full size candy bars for breakfast, may have been ill-conceived. We thought this would be a good learning experience for them; it was a good learning experience for us. Kids are the worst at self-regulation. They are more into self-medication: They’ve got a fever, and the only prescription is more candy.

The next day was quite different. I asked Nola what she thought. She agreed that ten pieces of candy for breakfast was a poor decision. I asked her what she would suggest and she said that they could eat one piece in the morning, two for lunch, and three for dinner. I found this brilliant and we put it in place.

We had a much better day.