At 1:38am, on the twenty-seventh of May, two thousand fifteen in the year of our Lord, I was rudely awakened by a woman’s voice informing me that muscles in her abdominal regions were straining themselves considerably at consistent intervals. The contractions had been coming every five minutes for the past hour and my wife asked me if I thought she was in labor. I stayed silent until she realized who she was talking to. Then she said that, yes, she thinks that she is in labor and wondered if we should go to the hospital, or just lie there for half an hour and see if the contractions stop. All I heard was the option where I could go back to sleep for half an hour, and said let’s do that.

I called to wake up my fantastic mother and she flew over to our house to be with our unconscious children, Nola(6), Violet(4), and Roman(18 mo.).

Then we found ourselves heading to the hospital, to add Baby(0) to the list of people we are responsible for.

The contractions were still five minutes apart and not that painful. Similar contractions occurred and eventually quit the night before, so that had us second guessing if we were truly in labor (I say “us”, like I had any idea what was going on). So I slammed the gas pedal down a quarter of the way to the floor and we moseyed through town at a driving pace not seen since the 1940’s. The polar opposite picture of what I was hoping that drive would be like. We were praying real labor would kick in by the time we got there and noticed that our car was low on gas. We could have easily made it but decided it’d be good to fill up first. And we did. The very last thing we wanted was for them to send us home because we got it wrong, on our fourth child. Being sent home is for amateurs. We’d definitely lose some street cred for that.

We finally roll in and after some initial monitoring they decide that we are indeed in labor—whew, street cred in tact. Since telling ultra-detailed birthing stories is usually reserved for women in very specific social situations that fall under the category titled “All Social Situations”, I’ll just hit the highlights. Seriously, I think the ticket taker at our movie theater regrets asking my wife how old our kids are, poor kid didn’t realize the thread he was pulling. All Social Situations.

Charity decided to get an epidural this time. That’s where they jam a large needle directly into your spine to numb the lower half of your body. With our previous three kids she went all natural. For all you 20-year-old single men that are still with us, that means she didn’t use any drugs for the pain, just the calming sound of the bones in my hand grinding into powder under her crushing death-grip.

She wrestled with getting the epidural, and then thought that since she’d done it three times drug-free she had earned an easy labor. In the immortal words of Parks & Recreation’s Donna and Tom, she looked at the woman in the proverbial mirror and said… 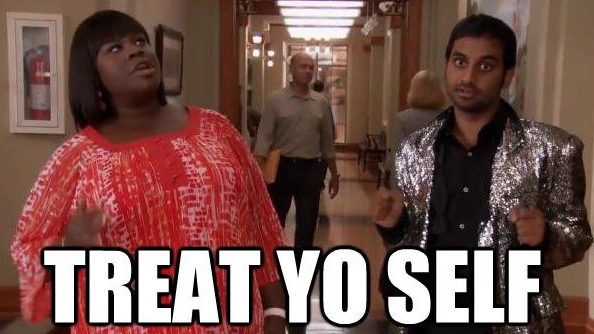 And a treat it was. She soon began smiling. And seeing color. She hated me less.

Char basically fell asleep during the last two hours of labor and I almost did too, which was quite different from the other labors. I’m used to just accepting hand deformity, smiling through the pain, and telling her that she’s doing great—even though, medically speaking, I really have no barometer for how good she’s actually doing, but I can’t imagine that saying anything else would be very productive.

Yes, this time my job was even more easy, if that was possible. I basically just had to exist. So as all the early morning adrenaline left me I found myself sitting on the couch praying that I wouldn’t accidentally fall asleep. You are supposed to go through trials and fights in a marriage, but asking for one by falling asleep during the birth of your child, well, there are much better ways to die. A few face slaps and I was back in business.

Char’s sister showed up right around PUSH! time. Kind of like those people who say they will help you move on Saturday, then show up at the very end to help carry the last armful of couch pillows into the house. Well played Felic, well played.

I tease. We didn’t want to wake you up any earlier than we had to, and wouldn’t have had it any other way.

So a handful of pushes later and, like that, our tax liability becomes less this year.

This is the first time where they immediately put the newly evacuated baby in Char’s arms, straight out of the womb. With our other three they would hold the baby up for us to see, much like a waiter displays a bottle of fine wine to an affluent couple, and after we nod our heads in approval they’d pass it off to nurses to clean it up, get its weight, pour goop in its eyes, etc. We’d get to hold it after all that.

But not this time.

This time it was, “Here, take this. It just came out of your uterus. Also, it’s still attached.”

They said that studies have shown that it is good for the mother to hold her baby immediately after it’s born. Basically hundreds of years of medical research has just thrown their hands in the air and said, “Forget it, let’s just do it like we have been since the dawn of time.”

After a brief moment in Charity’s arms they clamp off the umbilical cord, slap a pair of kindergarten safety scissors in my hand, and tell me to cut it in half.

I’ve done this three times, and it has never felt as ceremonious or symbolic as the procedure wants to be. The feeling of, “I, as the father, shall be the instrument that separates my child from its source of life, grants it independence in this world, and takes responsibility for its healthy upbringing” never enters my mind. There’s no time.

Here I am just a helpless bystander, watching everyone bustle around until all of a sudden there is someone holding a taut umbilical cord in my face and saying, “Cut this.” And then, *record scratch sound*, EVERYTHING stops. They are all looking at me like I’m holding them up. Like I’m preventing important tests and procedures. Like they can’t move on in ensuring that my baby and my wife are fine until I take my Crayola branded scissors and try to gnaw through my baby’s previous lifeline in nature’s best imitation of a horrible ribbon cutting ceremony.

But by that point, I would basically do whatever a medical professional told me to do. If they had said, “Hey cut this cord, and then take this brown paper bag full of white powder down to the shady industrial area and exchange it for a silver briefcase.” I’d kiss my wife and baby and be out the door, no questions asked. Because darn it, my doctor needs me.

With urgency in the air and everyone staring me down it’s difficult to pause and take in the symbolism. So I hack my way through that sucker and then everyone is off to the races, removing monitor equipment and cleaning up. Like I wasn’t even there.

I’m glad I cut the cord all four times and would recommend it. Just know that you’ll have to wait until later to dwell on the ceremony’s significance.

They are doing this new thing where after the baby is born and plopped in their mother’s arms, everyone leaves. Anyone with the slightest degree of medical training vacates the room. They call it Golden Hour and quickly Charity, Felicity, and I found ourselves alone with a helpless baby. No nurses or doctors had even touched him yet, let alone looked at him up close.

Not long after, my son starts to choke on some sort of godawful birthing fluid that he’d coughed up. We look around the empty room for anyone with medical knowledge, or at the very least a janitor who has binge-watched House recently. Nothing.

It’s like a pilot randomly selecting you to take over the cockpit for an hour. Peaceful right?

He finally figures out how to swallow and gets it under control. Much to our insecure relief. I’m sure we all smiled and individually prayed that we would get through the next 50 minutes with everyone still alive.

They should really call it Scary Hour, it would be more accurate.

Finally medical personnel filters back in and they whisk him to the other side of the room for proper examination. A collective sigh of relief later and we are texting family and taking pictures.

The kids had all risen from sleep at last and after a quick breakfast they arrived with grandma.

The girls tip-toed in as if too much sound would break a newborn—in hindsight I should have told them that it would, a few months of only whispering would’ve been unbelievable. Large grins wrapped their faces as they bypassed their father and stepped up to the portable crib.

They stared and smiled at the baby like it was a 8lb 2oz block of chocolate ice cream. You could feel their big sister statuses each gain a motherly upgrade.

Roman was leery of the whole situation. The only upgrade he got was in quizzical looks and brow-furrowing.

A Shake Up will do that to you.

They finally got everything squared away, swaddled up our newborn like a nice little people burrito, and handed him off to me. Some of our amazing friends, who had held every one of our fresh babies, were there and we all started to pass him around in the world’s slowest and most careful game of Hot Potato. Which I think we can all agree, isn’t as fun as it sounds.

There’s nothing more nerve-racking than being handed a newborn baby. You’ve got to keep a wobbly head supported at all times during the transition, try not to end up awkwardly holding hands with the person passing it off, and make sure neither of you drop it because it’s fragile human life for crying out loud. It’s almost as bad as when someone hands you their phone.

We sent our family upstairs to our new hotel room…I mean hospital room—our hospital is nice and the unlimited room service, for Char only, is like heaven. We then gathered our things, said our goodbyes to the complete strangers that we just shared such a life-changing moment with, and headed upstairs to join our three kids and collectively try to figure out how we are going to make it through the next 20 years.

At 7:41am, on the twenty-seventh of May, two thousand fifteen in the year of our Lord, our family grew by one. We are now six strong…which seems quite strong enough.

Welcome Remington Thomas, we are glad you are here. Don’t be in a hurry to grow up.

But feel free to sprint like mad through the potty training stage. 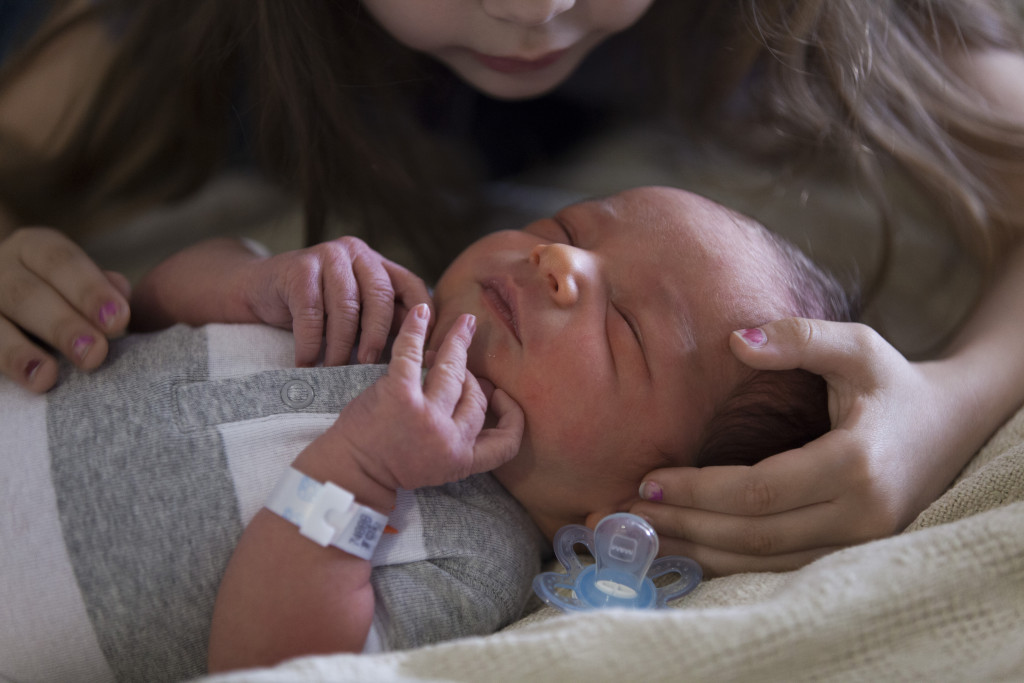