Tuesday is our hump day. We are stepping into the the back half of our week without my wife and feeling good. I’ve got three kids accounted for and they are walking on two feet under their own power.

The times are approximate, the feelings are not.

Alarm goes off at stupid-early o’clock. I pull myself out of bed to start the day with some creativity.

Make instant breakfast for everyone. Try to appease Roman with a handful of Cheerios as his oatmeal cools. He just looks at the pile and pushes it to the floor.

I grow concerned as he has begun to exhibit this behavior toward the little crunchy O’s.

So I take one Cheerio and put it to his mouth. He just stares at me like, “Good luck with that chump.”

I fear that Roman doesn’t like Cheerios anymore. What other snack food comes in ten pound boxes for like a buck? Now we’ll have to spring for serious snacks. Looks like I’ll just have to pull from Roman’s college fund to cover the jump in the budget.

Also, I should start Roman a college fund.

Roman is still hungry after finishing his oatmeal. Not wanting to give up, I try Cheerios one more time. Nope.

I head to the refrigerator to grab a fruit cup for him and turn around to find Nola, motherly dumping a pile of Cheez-Its in front of his face.

I tell ya, my kids don’t understand breakfast food.

My mom shows up to take over so I can go into the office.

Earlier this morning Roman invented the new sport, Extreme Piano Playing. I just looked at him and smiled. “Nice, buddy!” 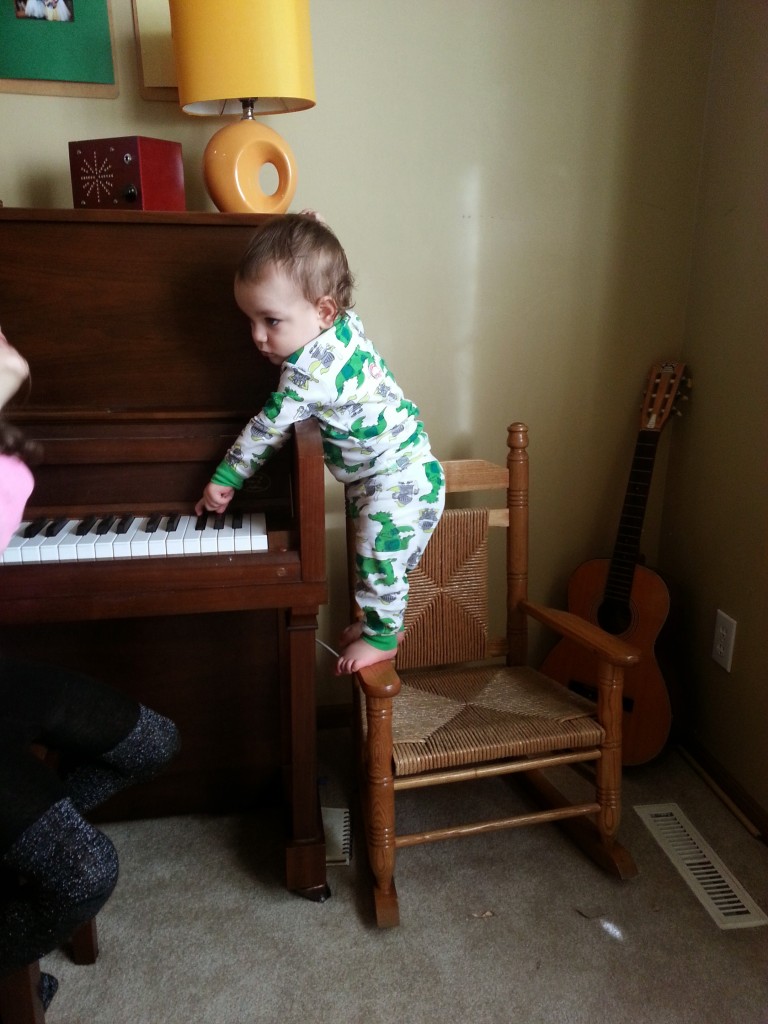 Now that my mom is here, and seeing this, she’s freaking out. I tell her I’m fine with him standing precariously on the armrest of a rocking chair. Mostly because it’s fun to see her get wide eyed and take a deep, unsure, breath of reserved disagreement.

Also, for some odd reason, it’s important to me that my kids are good climbers. I don’t know why but it’s something that I encourage. Instead of making them get down from something I’d rather stand under them and tell them where to put their feet and point out secure handholds.

It is not a grandma thing.

I hop in the van and drive off. At one point, on my way to work, I looked in the rearview mirror and almost asked the kids if they are doing alright because they seem quiet—

They are at home with my mom. It’s just empty car seats starting back at me.

I spend the rest of the drive wondering if this was a glimpse of crumbling sanity. Do you know if you’re going insane?

Work was no event.

Arrived at home for a debrief with my mom. Apparently she has cleaned much of the house. I had been doing a decent job but she gained us a lot of ground. I instituted a new rule of setting fire to any toys or clothes that fall on the floor longer than the 5 second grace period.

Mom said Roman talked through his two naps today and probably didn’t sleep much. He should wake up at 4pm but I think he just fell asleep at 4pm. Should I wake him so he’ll be tired tonight or let him sleep so he won’t be cranky?

This is throwing me. I wasn’t prepared for these drastic shifts in schedule. I kind of feel like that line of ants in A Bugs Life after a leaf lands in their path.

I’ll let him sleep for 30 minutes then wake him, because I’m off the rails at this point and just winging it.

The girls and I hear Roman stirring so we pounce on it and get him out of bed, hoping that was the right amount of rest for him.

We have small group tonight at 6:30pm and I wisely decided to have the girls find clothes to wear over an hour and half beforehand. It wasn’t stressful but it took them forever to put together something that I was at least 40% sure looked decent.

The beauty is that even if they are dressed terribly, people will just look up and see a solo dad more focused on taking a head count than fashion, then with a pity-smile, they’ll nod understandably. At least that’s what I’m crossing my fingers for.

Roman has had a runny nose for a little while. Kids are unbelieveable. They could have snot pooling around their upper lip for eight hours, but the moment you bring a tissue to their face is the moment they decide they can’t stand it anymore and run their nose across both of their forearms.

And then try to give you a hug.

I didn’t get dinner started soon enough, because I didn’t fully take into account the time it takes to eat it.

Basically had to enforce martial law to get them to focus on finishing their food so we can get to small group on time.

“If you are not looking at your food and bringing it to your mouth, I will destroy you!” Or something like that. 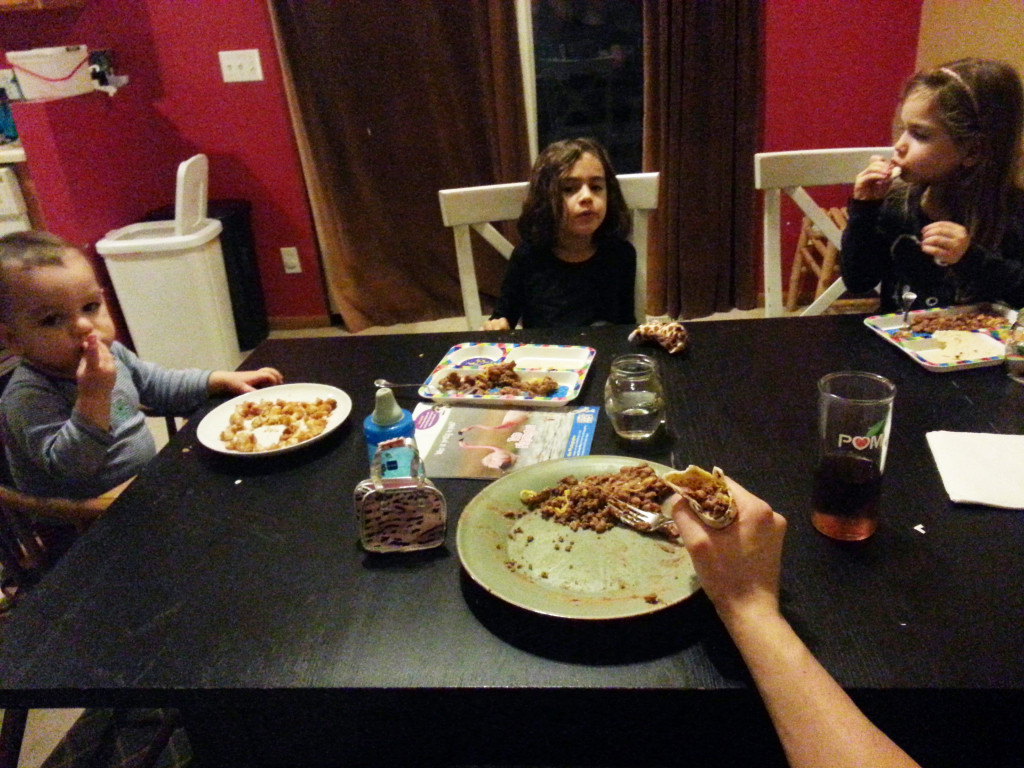 We are late as crap for small group.

Nola explains to me, “If someone else shows up after us then we are not late, if not then we are late.” I think she thinks being late is like trying to beat someone through the intersection while the light is turning red. Whoever is last is at fault.

Regardless, this couple didn’t have kids to unbuckle and unsnap so they beat us inside the house. They just glided out of their vehicles and into the house with the fluidity of a graceful dancer. I’m sure their feet crossed the threshold before their engine came to a complete stop.

I’m frozen in awe. I look at all my children who are strapped to their chairs like astronauts leaving the atmosphere. We’re still ten minutes from exiting our van.

Small group was great. I was chatting it up so we got home way past everyone’s bedtime. This usually makes getting ready for bed a lot worse. They are overly tired and I am overly done with them.

But this time, on the way home, I had an idea.

We get inside and I tell them focus on getting their jammies on, and focus only on that. If they get distracted, which happens more frequently the later it is, they won’t be able to talk. I shall silence them like a king annoyed with a whiny supplicant.

They nod in understanding of the policy then take three steps down the hall before they drop to all fours, pretend to be cats, and chase each other away from their room—

Boom! No talking fools. They now can’t say a word until they are clothed in attire appropriate for sleeping.

This was surprisingly effective and had a couple benefits. One, they were motivated to focus on the assigned task, and two it was incredibly quiet. Like almost creepy quiet.

They got ready quickly and went to sleep fast.